Archive for the ‘comics’ Category

Well, it’s safe to say this year didn’t go quite as planned, as far as updating. This was mainly due to a lack of time – the short version is that things got busier at work and stayed that way. Then as more time passed since the last update, it got harder to start back up again. I doubt if I’m going to update every day of 2018, but I’ll try to update a little more often than I did this year!

Anyway, ending 2017 for the Station V3 universe is the (now traditional?) four update day, with new comics up here and at Z7, Ebb’s Children, and Silence in the Darkness on Q16!

Not just here today, but also at Z7, Ebb’s Children, and Silence in the Darkness on Q16!

Posted in comics | No Comments »

I took part in the Web Comic Secret Santa Exchange again for 2016, and got some nice art from ZoÃ« Kirk-Robinson: 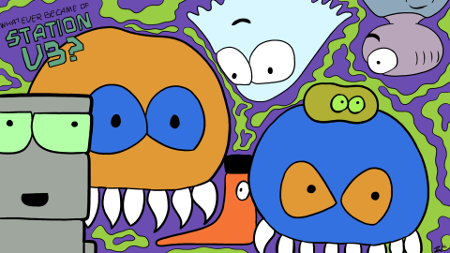 Updates haven’t quite started again… But there’s an update today! Time is funny that way – and one of the reasons for the lack of updates has been a lack of time. Blame the Time Eel!

(The other reason is that in September my right hand said it really needed a break from drawing. So I tried my left hand for the last few strips in September, but it took more time, and now we’re back to blaming the Time Eel again.)

Posted in comics | No Comments »